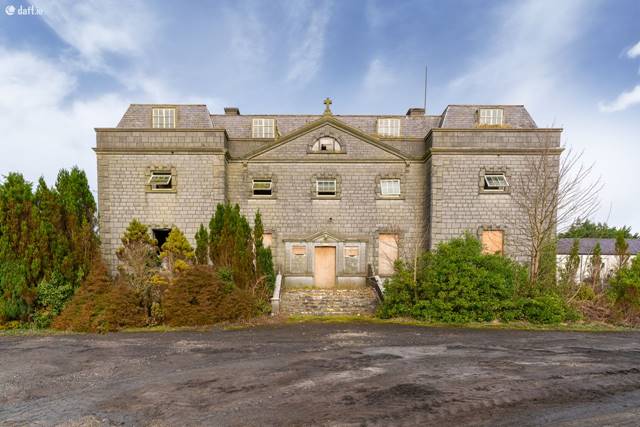 Located 1kms north of Claremorris town centre with access off the N60. The property is located adjacent to Mount Saint Michael Secondary School and in close proximity to the Gratten Park Residential Estate. This is an elevated site with excellent views. Claremorris is the 4th largest town within County Mayo having a population of 3,700. It benefits from excellent road and rail connectivity being on the N60 and N17. Claremorris is also positioned on the Dublin to Westport rail line having a number of scheduled train services daily. Finally Ireland West Airport is just 31kms away.

A period mansion dating initially from c1770. The property has not been in use for a number of year and having fallen into disrepair, now requires complete refurbishment throughout. Extending to 890sq.m (9,585sq.ft) Claremount is a three storey over basement building constructed of cut limestone with a mansard roof slate roof.

The National Inventory of Architectural Heritage describes the property as, A country house erected for Colonel Dominick Browne (Bence-Jones 1988, 84) representing an important component of the mid eighteenth-century domestic built heritage of the outskirts of Claremorris with the architectural value of the composition, 'a commodious building.suitable as the residence of an independent person' (Encumbered Estates 1854; Lyons 1993, 123), confirmed by such attributes as the deliberate alignment maximising on panoramic vistas overlooking gently rolling grounds; the symmetrical footprint centred on a Classically-detailed doorcase; the definition of the principal floor as a slightly elevated "piano nobile"; the construction in a "sparrow pecked" rough cut limestone offset by sheer dressings demonstrating good quality workmanship; the diminishing in scale of the openings on each floor producing a graduated visual impression; and the parapeted roof restructured to designs signed (1941-3) by Thomas Joseph Cullen (1879-1947) of Suffolk Street, Dublin (DIA). Having been reasonably well maintained, the elementary form and massing survive intact together with quantities of the original fabric, both to the exterior and to the interior where contemporary joinery; Classical-style chimneypieces; and sleek plasterwork enrichments, all highlight the artistic potential of the composition: however, the introduction of replacement fittings to most of the openings has not had a beneficial impact on the character or integrity of the country house. Furthermore, a bunker-like domed icehouse [SMR MA101-017003-]; and a walled garden (----), all continue to contribute positively to the group and setting values of a much diminished estate having historic connections with the Browne family including the Honourable George Browne MP (c.1735-82); the Right Honourable Denis "The Rope" Browne MP (1763-1828); and James Browne MP (1793-1854); and the Blacker family including Murray McGregor Blacker JP DL (1824-1913) of Goldingham Hall, Suffolk.

Claremount is not a Protected structure as set out in the Mayo County Development Plan (2014 - 2020).

Previous planning permission (Reference No.063784) was granted on 10th November 2007 to create a substantial development comprising 52 No. Apartments within 4 No. 2 Storey blocks.

Under the Claremorris Local Area Plan 2014 - 2020 (as amended), the property is zoned Residential (Low Density Phase 1).

We understand that the property is or can be connected to all available mains services including Sewerage, Water and Electricity.

The property has a Freehold title held within Folio MY68715F.
BER RATING